Read On this page today Open Heaven Devotional 19th April, 2022 By Pastor EA Adeboye Brought to you by Kingdomsermons

MEMORISE: And when he heard that it was Jesus of Nazareth, he began to cry out, and say, Jesus, thou son of David, have mercy on me. Mark 10:47

1. Now Naaman, captain of the host of the king of Syria, was a great man with his master, and honorable, because by him the LORD had given deliverance unto Syria: he was also a mighty man in valor, but he was a leper.

2. And the Syrians had gone out by companies, and had brought away captive out of the land of Israel a little maid; and she waited on Naaman’s wife.

3. And she said unto her mistress, Would God my lord were with the prophet that is in Samaria! for he would recover him of his leprosy.

4. And one went in, and told his lord, saying, Thus and thus said the maid that ts of the land of Israel.

5. And the king of Syria said, Go to, go, and I will send a letter unto the king of Israel. And he departed, and took with him ten talents of silver, and six thousand pieces of gold, and ten changes of raiment.

6. And he brought the letter to the king of Israel, saying, Now when this letter is come unto thee, behold, I have therewith sent Naaman my servant to thee, that thou mayest recover him of his leprosy.

7. And it came to pass, when the king of Israel! had read the letter, that he rent his clothes, and said, Am I God, to kill and to make alive, that this man doth send unto me to recover a man of his leprosy? wherefore consider, I pray you, and see how he seeketh a quarrel against me.

8. And it was so, when Elisha the man of God had heard that the king of Israel had rent his clothes, that he sent to the king, saying, Wherefore hast thou rent thy clothes? let him come now to me, and he shall know that there is a prophet in Israel.

9. So Naaman came with his horses and with his chariot, and stood at the door of the house of Elisha.

10. And Elisha sent a messenger unto him, saying, Go and wash in Jordan seven times, and thy flesh shall come again to thee, and thou shalt be clean.

11. But Naaman was wroth, and went away, and said, Behold, I thought, He will surely come out to me, and stand, and call on the name of the LORD his God, and strike his hand over the place, and recover the leper.

12. Are not Abana and Pharpar, rivers of Damascus, better than all the waters of Israel? may I not wash in them, and be clean? So he turned and went away in a rage.

13. And his servants came near, and spake unto him, and said, My father, if the prophet had bid thee do some great thing, wouldest thou not have done it? how much rather then, when he saith to thee, Wash, and be clean?

14. Then went he down, and dipped himself seven times in Jordan, according to the saying of the man of God: and his flesh came again like unto the flesh of a little child, and he was clean.

15. And he returned to the man of God, he and all his company, and came, and stood before him: and he said, Behold, now I know that there is no God in all the earth, but in Israel: now therefore, I pray thee, take a blessing of thy servant.

16. But he said, As the LORD liveth, before whom I stand, I will receive none. And he urged him to take it; but he refused.

17. And Naaman said, Shall there not then, I pray thee, be given to thy servant two mules’ burden of earth? for thy servant will henceforth offer neither burnt offering nor sacrifice unto other gods, but unto the LORD.

19. And he said unto him, Go in peace. So he departed from him a little way.

In the Bible reading for today, the little girl had every reason to keep her mouth shut, being a mere slave, but she shared the testimony of the awesome power of her God.

That simple testimony birthed many more which include the healing of Naaman and his conversion from serving idols to worshipping the post High God. It was the testimonies Bartimaeus had heard in the past that birthed his own testimonies (Mark 10:46-52).

When you share your testimony, you are helping to raise the faith of other people to also receive a miracle from God. I remember when I just joined the Redeemed Christian Church of God and I would hear people talk about the healing power of the Lord.

.I found it hard to believe that one could get healed without medication. In fact, my thought was, You people have shown me the way to heaven; please don’t try to get me there faster than necessary.

However, one day, I saw an old man who was always bent double due to a disease, standing and walking upright. I was shocked, so when it was announced that he would be sharing his testimony of divine healing at the evening service, I was the first to arrive.

By the time I heard his testimony, my faith arose and I also began to walk in divine health from then. Your testimony is a link to someone elses testimony, so don’t hide it.

Secondly, testimonies draw people to become members of the Kingdom of God. Jesus said in John 4:48 that some people will not believe the gospel unless they see signs and wonders.

Share your testimonies with unbelievers, let them know how great your God is, let them realise what they are missing when they refuse to surrender their lives to Him. The young girl in the Bible reading today shared her testimony with unbelievers and ended up winning them to God.

Your testimony may be all that you need to win that fellow in your office or neighbourhood to Christ; be sure to share it today.

Share a testimony of Gods goodness and power with at least one unbeliever today. You can even do it on social media.

I’VE A MESSAGE FROM THE LORD HALLELUJAH!

CHORUS Refrain:
“Look and live,” my brother, live,
Look to Jesus now and live;
‘Tis recorded in His Word, Hallelujah!
It is only that you “look and live.”

3. Life is offered unto you, Hallelujah!
Eternal life your soul shall have
If you’ll only look to Him, Hallelujah!
Look to Jesus, who alone can save. 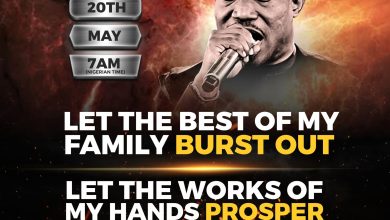