20 And David rose up early in the morning, and left the sheep with a keeper, and took, and went, as Jesse had commanded him; and he came to the trench, as the host was going forth to the fight, and shouted for the battle.

21 For Israel and the Philistines had put the battle in array, army against army.

22 And David left his carriage in the hand of the keeper of the carriage, and ran into the army, and came and saluted his brethren.

23 And as he talked with them, behold, there came up the champion, the Philistine of Gath, Goliath by name, out of the armies of the Philistines, and spake according to the same words: and David heard them.

24 And all the men of Israel, when they saw the man, fled from him, and were sore afraid.

25 And the men of Israel said, Have ye seen this man that is come up? surely to defy Israel is he come up: and it shall be, that the man who killeth him, the king will enrich him with great riches, and will give him his daughter, and make his father’s house free in Israel.

26 And David spake to the men that stood by him, saying, What shall be done to the man that killeth this Philistine, and taketh away the reproach from Israel? for who is this uncircumcised Philistine, that he should defy the armies of the living God?

27 And the people answered him after this manner, saying, So shall it be done to the man that killeth him.

28 And Eliab his eldest brother heard when he spake unto the men; and Eliab’s anger was kindled against David, and he said, Why camest thou down hither? and with whom hast thou left those few sheep in the wilderness? I know thy pride, and the naughtiness of thine heart; for thou art come down that thou mightest see the battle.

29 And David said, What have I now done? Is there not a cause?

30 And he turned from him toward another, and spake after the same manner: and the people answered him again after the former manner.

31 And when the words were heard which David spake, they rehearsed them before Saul: and he sent for him.

32 And David said to Saul, Let no man’s heart fail because of him; thy servant will go and fight with this Philistine.

33 And Saul said to David, Thou art not able to go against this Philistine to fight with him: for thou art but a youth, and he a man of war from his youth.

34 And David said unto Saul, Thy servant kept his father’s sheep, and there came a lion, and a bear, and took a lamb out of the flock:

36 Thy servant slew both the lion and the bear: and this uncircumcised Philistine shall be as one of them, seeing he hath defied the armies of the living God.

MEMORY VERSE: “And all this assembly shall know that the Lord saveth not with sword and spear: for the battle is the Lord’s, and he will give you into our hands.” – 1 Samuel 17:47

The story of David, Israel’s greatest king and one of the finest characters in the Bible, also illustrates the significance of the anointing for more. In fact, the grace or anointing to give more to God orchestrated a turning point in his life.

David’s father, Jesse, sent him to give food, drink and other items to his brothers who were serving in Israel’s army. Israel was at war with the Philistines at that time. David was also required to bring a word to his father about his elder brothers and the war. David went to the battlefield and delivered the victuals to his brothers. But he did more than that.

He decided to solve a great problem with the grace and anointing of God upon his life. Though he wasn’t a professional soldier enlisted in the army, he volunteered to confront Goliath, the boasting Philistine champion in a single combat. The young but brave David conquered Goliath and the Philistines fled, leading to a resounding victory for Israel and glory to Jehovah. That decision positively changed the course of David’s life forever.

Nehemiah was the king’s cup bearer but his lowly position and his being in captivity did not deter him from seeking to give more to God. The news of the broken down walls of Jerusalem saddened him and he desired to have them repaired promptly. He sought the king’s permission and his request was granted.

Dear reader, I want you to know that it wasn’t Nehemiah’s role as a cup bearer to the king that announced him and made him one of Bible’s greatest leaders and finest characters. Rather, it was his role as God’s project manager and purpose partner that made him a shining reference point till date.

In spite of the stiff opposition he faced in the hands of Sanballat, Tobias and Geshem, he and the Jews that rallied round him started and completed the project. Nehemiah was a man of faith, prayer and tenacity. He opted to give God more (beyond serving a heathen king in captivity) and God honoured him with success, victory and fame.

Beloved, don’t settle for minimum or average. Do more in your giving and Kingdom building. Give your utmost to the Almighty God!

MOTIVATIONAL QUOTES:
Always go the extra mile in your service to God and humanity.

PROPHETIC WORD FOR TODAY:
Today, receive an insatiable hunger and thirst to serve God relentlessly, in the name of Jesus.

Dear God,
I come to You in the Name of Jesus. I admit that I am not right with You, and I want to be right with You. I ask You to forgive me of all my sins. The Bible says if I confess with my mouth that “Jesus is Lord,” and believe in my heart that God raised Him from the dead, I will be saved (Rom. 10:9). (Rom. 10:9). I believe with my heart 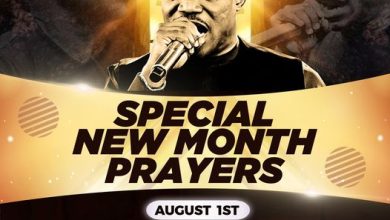