Daily Manna devotional by Pastor Kumuyi of the Deeper Christian Life Ministry for today is here. Digest the word of the lord and pray believing.

1. And he began to speak unto them by parables. A certain man planted a vineyard, and set an hedge about it, and digged a place for the winefat, and built a tower, and let it out to husbandmen, and went into a far country.

3. And they caught him, and beat him, and sent him away empty.

4. And again he sent unto them another servant; and at him they cast stones, and wounded him in the head, and sent him away shamefully handled.

5. And again he sent another; and him they killed, and many others; beating some, and killing some.

6. Having yet therefore one son, his well-beloved, he sent him also last unto them, saying, They will reverence my son.

7. But those husbandmen said among themselves, This is the heir; come, let us kill him, and the inheritance shall be ours.

8. And they took him, and killed him, and cast him out of the vineyard.

9. What shall therefore the lord of the vineyard do? he will come and destroy the husbandmen, and will give the vineyard unto others.

10. And have ye not read this scripture; The stone which the builders rejected is become the head of the corner;

11. This was the Lord’s doing, and it is marvellous in our eyes?

12. And they sought to lay hold on him, but feared the people; for they knew that he had spoken the parable against them; and they left him, and went their way.

“And have ye not read this scripture; The stone which the builders rejected is become the head of the corner.”

In this parable, Christ spoke about the vineyard, husbandmen and the servants. The parable is about Israel’s rejection of Jesus. God is the Owner of the vineyard and He expects fruits from it. The vineyard is Israel and the husbandmen are the religious leaders of Israel. The servants sent are prophets of God throughout the history of Israel. The Son is Jesus Christ, who they killed; thereby fulfilling the Scriptures.

The story reveals the husbandmen’s confrontation with the Owner of the vineyard. The Owner wielded His well-known ancient attributes of patience, perseverance and love in response. Repeatedly, the husbandmen rejected the overtures of the Owner and maltreated His servants “beating some and killing some”. In His final attempt to make the husbandmen see reason, He sent His only Son, hoping that “they will reverence [Him]”. Instead, they decided to inherit the vineyard by killing the Son.

This was a prophecy concerning Jesus’ treatment and rejection by the Jewish leaders. He was rejected by men but was glorified by the Father and made the head Corner stone. Though He knew He would be killed by the leaders of Israel, He was bold and courageous in adversity and still fulfilled His mission.

As followers of Jesus, we must have the same courage to preach, stand for the truth and defend the doctrines of the Bible until the end. Those who accept the Cornerstone are called into His marvelous light and all concerning them will be fulfilled. But doom and damnation await all unrepentant sinners who contemn the salvation of God. It is better for them to repent now as the love and mercy of God is still available.

THOUGHT FOR THE DAY:
If you reject Him as Saviour, you will meet Him as Judge.

THE BIBLE IN ONE YEAR:
Jude 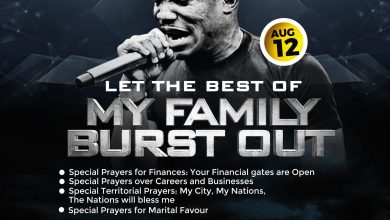